You’ve likely seen something in the news over the last year or so about radon gas. Or maybe you’ve been aware of it for longer but not really sure what it is and how it could affect you. Maybe you haven’t heard of it at all yet.

Awareness and knowledge of radon is at varying stages for people.
But the push is on to make more people aware of it.

Why? Because it’s a pretty big deal – especially for those people that are affected by it in the abode they live in.

Radon is a colourless, tasteless, odourless gas that is produced as a by-product of uranium decay.

Oh, and it’s radioactive too.

That means that it’s a notable, potential cause of lung cancer (according to many sources).

So-if it’s that big of a deal, why aren’t we talking about it a lot more in real estate transactions?

Well-unfortunately, it’s not that cut and dried of a situation.

There are both short-term and long-term tests available.

Short-term tests can take from 2-7 days to produce results.

So why aren’t we using short-term tests in real estate deals?

Short-term tests are not generally used in real estate deals for a few key reasons (in our opinion / and at least in our part of the world):

2/ short-term tests are inaccurate when it comes to identifying a long-term outcome; the one you should base any proactive decisions on

3/ the test pucks can be ‘gamed’, thereby producing a false sense of ‘no problem’ and leaving the new owner in an unknowing, potentially dangerous situation

Long-term tests are not generally used in real estate deals for one reason – they’re too long for the average transaction, since the recommended minimum test time is a 3 month period. (Oh and as previously mentioned – they can be gamed.)

So what does that mean to you?

It means that when you get into a new home (new or new for you), you should take responsibility to ensure that you understand what your house measures for, when it comes to radon.

When measuring for radon, there are number of companies available that provide a test kit and the subsequent testing and provision of results, all for a very affordable price. The best way to test for radon, and get an accurate depiction of what your true levels are over time, is to leave the test out for a minimum of 3 months, and preferably over a winter, when you’re house is sealed up as tight as it’s going to be.

Levels of radon in a home are deemed acceptable by Health Canada at 200 becquerels per cubed meter or 200 Bq/m³ .

The World Health Organization deems the preferred acceptable level to be 100 Bq/m³ .

Either way, if your home tests higher than 200 Bq/m³, you should discuss with a pro, what your options are to mitigate, or not. (Really, you can and should discuss any result with a professional for peace of mind though.)

I could go on further, but really-there’s a lot of information available to anyone about radon and its effects. You just need to follow the sources and read up on it. Then act on it.

As far as real estate goes, this is what our governing body, RECA, has to say about it.

We tested our home when we moved in.

We discovered that we had some pretty significant numbers, so went ahead with the sub slab depressurization (SSD) method for mitigation. The mitigation process was really quite simple and it was done in one day (by professionals). Once it was completed, the company provided new test pucks for us to place in a couple locations (because of our unique set up). We left them for about 5-6 months, again, over a winter. We discovered that the SSD method was working great.

We now have a small digital monitor to tell us where we’re at on any given day, and the numbers have remained low. 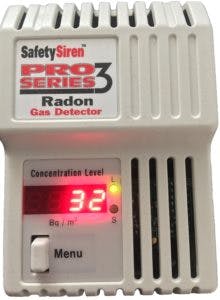 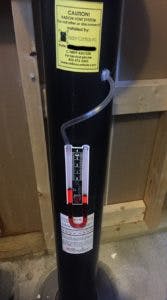 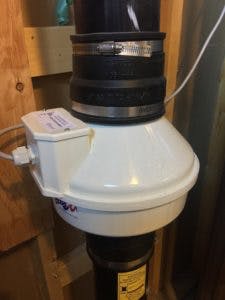 And a word from Evict Radon:

Got questions – you can find a lot more info by following any of these sources listed below!